I’ve added a Tumblr account to my blog: drasmyr.tumblr.com. Feel free to follow me there as well.

It’s Christmas Eve. Pretty much my favorite time of the year (excepting maybe Thanksgiving). Time to hang out, light candles, listen to endless Christmas Music, and decorate the Christmas Tree. Although I briefly considered doing a monster mishmash of a vampire Santa, I decided against it–in honor of the holiday there will be no regular post today. So, Merry Christmas everybody. Have a great holiday!

“The Emperor’s Soul” by Brandon Sanderson is a much shorter book than many of Brandon Sanderson’s other works. The copy I have is only about 170 pages long. To me it came across as kind of a long short story, instead of a novel. Maybe it was intended that way; I’m not sure. Anyway, the story is set in the same world as Brandon Sanderson’s first novel: Elantris. However, it’s hard to tell that on first blush. The magic system seems different—which it shouldn’t be, as it is the same world. There is no mention of the Dor at all in this book, but there are a few references to some of the countries from Elantris, like Fjordell, but that’s about it. It says in the postscript that it is set in that world so I’ll have to take Brandon Sanderson word on that.

Like I said, the magic system seems different than before; I had to think about it to find a similarity. And, as far as I can tell, it is this: writing. The magic systems introduced in Elantris all involved some form of writing to invoke their power. This book introduces a new form of writing to invoke magical power. The main character, a young woman named Shai, is a master Forger. And the term Forging here, is more reminiscent of the term meaning copying something than it is heating steel and shaping. That had me confused on the back copy. When I originally read it, I thought she was creating a whole new soul for the Emperor from nothing… something I find, if not impossible, at least philosophically unsatisfying (although it is, of course, Brandon Sanderson’s book). Her actual task in the story is slightly different. The Emperor’s true soul is still there, it is just suppressed and inactive due to injury. She must, through the art of Forgery, construct a new history for the Emperor and his soul, allowing him to function. Because it is a Forgery, it won’t be a perfect method of “healing”—there will be gaps in his knowledge, etc…–but it will give the Empire its ruler back and allow him to function similarly to the way he did before he was injured. Hence, it will be as if he has a new, slightly faulty “copy” of his original soul. At least, that’s how I understood it.

There isn’t a lot of action in this book. It consists mostly of Shai being in prison and talking to/figuring things out about her captors. A considerable amount of effort is also spent developing and explaining the magic system.

I was having certain issues while reading the book, so that I had some difficulty concentrating on it. As a result I’m not comfortable giving it a precise rating, so I will give it a range. I’d say it is somewhere between three and a half, and four stars out of five. It seemed worth reading to me, but I won’t swear by that testimony. 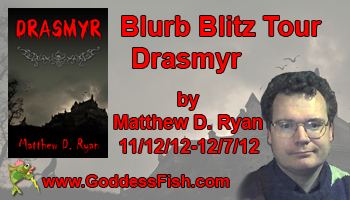 As of today, the Blurb Blitz Blog Tour for my book Drasmyr is officially over. Initially, we planned on having twenty stops, but we were forced to remove one because it involved a strictly adult site… and I don’t feel that is a good fit for my book.

So, the tour is over. We will be awarding the prize sometime this weekend, and we will announce it on Monday. Have a great day and a Merry Christmas.

My blurb blitz blog tour for my vampire fantasy novel, Drasmyr, continues today. Every day until December 7th, I’ll be visiting a variety of blogs across the Internet where promotional material for my book will be posted consisting of a blurb and an excerpt, or so. At the end of the tour, one of the commenters on the tour (the tour sites, NOT AToastToDragons) will win a prize. Today we have: The Bunny’s Review (http://bunnysreview.com/2012/11/drasmyr-matthew-d-ryan/#comment-3748/) Please check them out and show them your support.

And check out the sponsor of the tour: http://www.goddessfish.com/.